The last of the ‘last’ of the Barley walks with a drop in at Newchurch. I come across another work of art remembering the Pendle witches and find where some of the water comes from for Nelson’s bathtubs.

Map (click on it to open in a new window)

Let’s face it, when you find somewhere you like you want to keep going back again and again. I visit a lot of walking blogs here on WordPress and there are times when I think I need to stock up on my North Face stuff, get the sleeping bags and tarps, buy me a folding shovel and go wild camping in the Pyrenees. That would make my ambles and rambles look a bit slim, wouldn’t it?

But a few years ago I was sitting next to Sprinkling Tarn, in the shadow of Great End in the Lake District. The plan was to go to the top of Esk Pike, but the day was so tranquil, so relaxed and I had found one of those body shaped hollows in the grass that was so comfortable I didn’t want to move. Part of me was hassling to get up and go, because that was the purpose of the day; the other part of me was saying ‘stop making the mountain your god.’ And I’ve lived by that rule ever since.

So it was back again to Barley, heading west from the village to have a look at the nooks and crannies that hold the two reservoirs named after Stan and Hilda Ogden from Coronation Street. (Not really.) I’m getting used to my parking space at the base of Pendle Hill and today the summit was wearing a dark cloud for a hat, but it was blue skies where I was heading.

A pint in the pub set me up and off I went, up the hill, got lost in the field, refound the path and the route led me through a small plantation. The sign at the entrance warned of the presence of phytophthora; another area affected by the disease that seems to have caught hold everywhere. 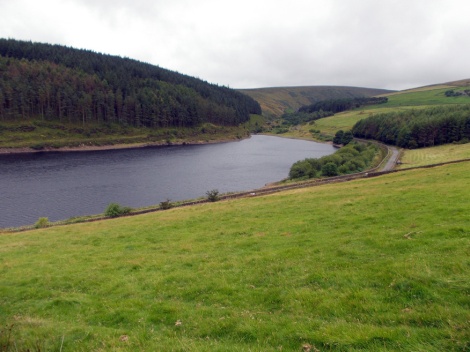 A very solitary farm tucked beneath the body of the Hill.

And the mist is almost rising.

Back on the service track heading up the valley I came across a waymarker on the Pendle Witch Trail with a poem by Poet Laureate Carol Ann Duffy. The waymarker, designed by artist Stephen Raw, is one of a number along a 51 mile walk from Pendle to Lancaster. The section of the poem you can see on the Ogden waymarker is printed in bold:

One voice for ten dragged this way once
by superstition, ignorance.
Thou shalt not suffer a witch to live.

Witch: female, cunning, manless, old
daughter of such, of evil faith;
in the murk of Pendle Hill, a crone. 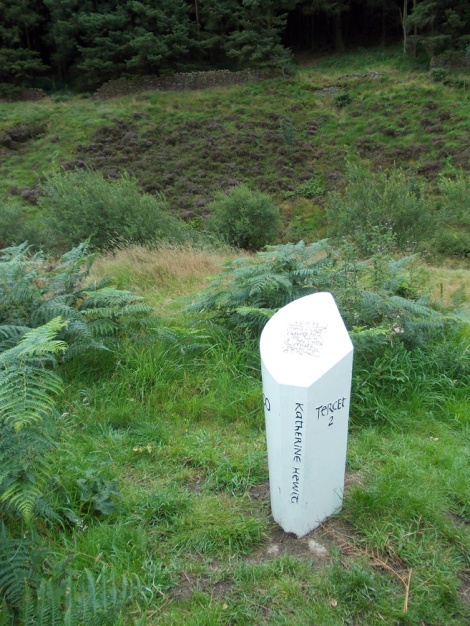 One of Stephen Raw’s waymarkers. 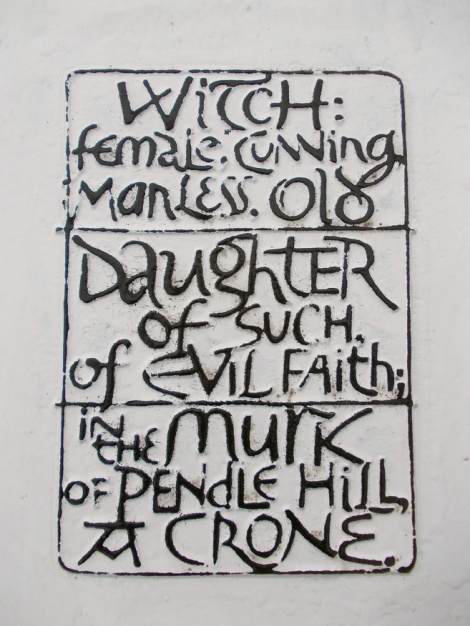 The second tercet of The Lancashire Witches by Carol Ann Duffy.

You can see the full poem in the photograph below. 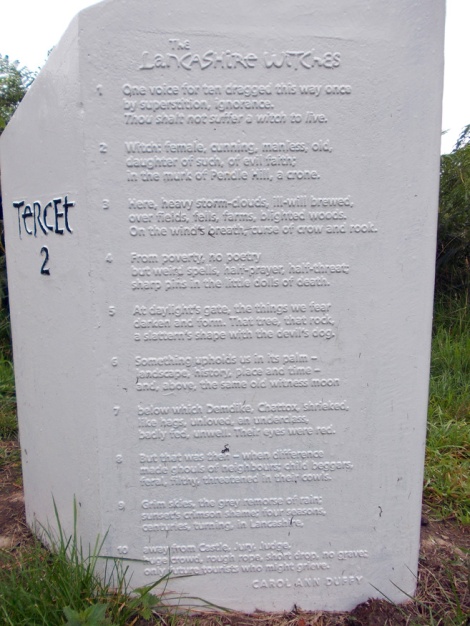 The full poem. It should be readable if you click through to the enlarged version.

I didn’t follow the path here because I still hadn’t seen the smaller Upper (Hilda) Ogden Reservoir, so it was back to the track. Upper Ogden is about as far up the valley you can get before it becomes too narrow to have a useful reservoir. The clough continues a good way yet and it’s possible to get onto the southern flank of Pendle Hill for a steady walk to the summit. But I was heading now for Newchurch. 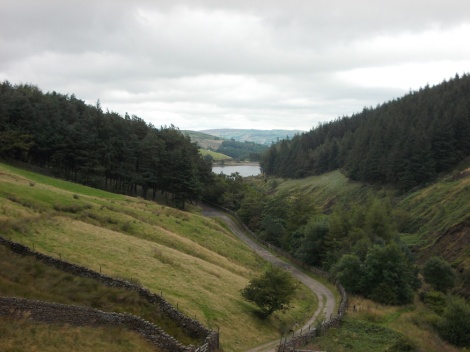 Looking back down the valley. 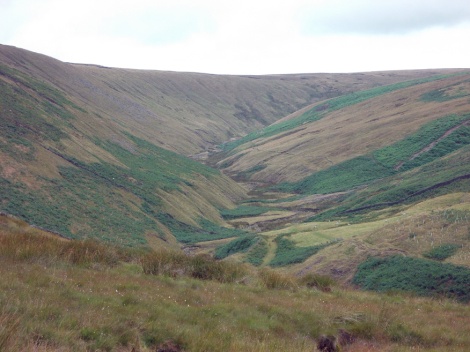 The route came over the top, distant views of civilisation to the south, and life to the north. The path fell down with the roll of the hill too steep to afford any view of Newchurch other than the pitched rooves. It was my intention to enter the witchcraft shop to buy Mist Over Pendle as a gift. Inside I was bothered and buffeted by a selection of stuffed crones hanging from the ceiling. I probably haven’t been in this shop for thirty years, but I don’t think it had changed. There was even a copy of Malleus Maleficarum, Heinrich Kramer’s ‘Hammer of Witches.’ The shop owner told me she had been there for thirty years, which is a long time even by tourist shop standards to survive.

Looking beyond Barley towards the Black Moss Reservoirs.

Barley down in the fold. The skies still threatening storms.

The good thing about Newchurch is that everywhere is downhill from it and so it was back to Barley and back to the car. Heading towards Downham the views across the Ribble Valley in early evening sunlight were amazing, but I neglected to stop to take photographs, (elsewhere on this blog there are a couple of photos I eventually took the week after).

That’s Newchurch, almost in its entirety. 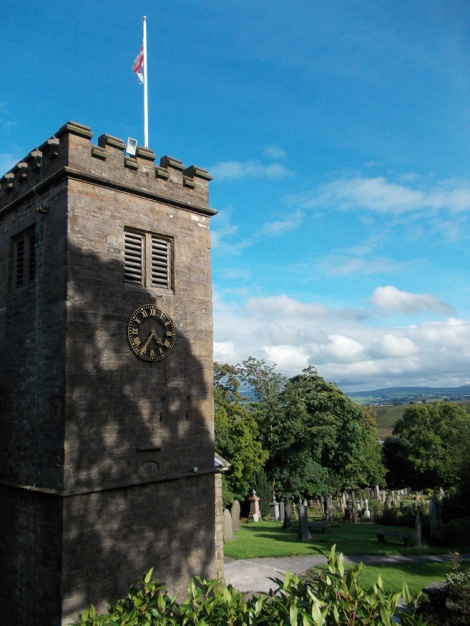 Hadn’t noticed it was twenty to five.