Earlier this year I was asked by the Friends of Low Hall to design some interpretation boards for their site. Low Hall is a local nature reserve located between the towns of Hindley and Platt Bridge in Lancashire. Like most of the nature reserves, SSSIs, conservation sites and wetlands, Low Hall is a remnant of Lancashire’s mining industry. Today, as traffic thunders past very few drivers and passengers will be aware of the work going on down below, or even of the site’s history.

The main lake at Low Hall.

The name derives from Lowe Hall, a house that belonged to the Langton family, originally from Leicestershire, who married into the local Banestic family. By the 17th Century the Langtons were well established and even survived persecution following failed papist plots. The last Langton died in 1733 and after a series of sales the hall ended up belonging to the Duke of Ellesmere. 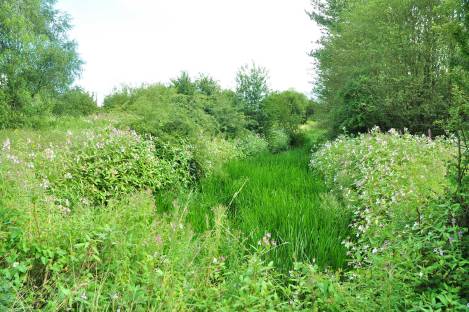 Iris in the flooded channel that was once the track bed of a railway line.

At the turn of the 1900s the Lancashire coalfields had been operating for almost half a century and Low Hall was a thriving colliery employing nearly a thousand people. By 1930, most of it was gone and the remaining damage, from spoil and flooding, was left to later generations to deal with. Most of the wealth created by the industry left the area along with the landowners.

One of the meadows at Low Hall.

So, what to do? Well as usual, when business clears off and leaves its mess behind, the repairs were left to the local authority, environmental groups and a small army of volunteers. Over forty years, beginning with the tree planting programmes of the 1970s and 1980s, Low Hall has been reclaimed and rejuvinated into a ecological site teeming with wildlife. In a small area there are meadows, woodlands, wetlands, a lake and streams supporting roe deer, hares, numerous bird species, butterflies, damselflies and dragonflies. The Friends of Low Hall use the Banded Demoiselle in their logo. The land is now owned by Wigan Council, managed by WLCT (Wigan Leisure & Culture Trust) with help from Lancashire Wildlife Trust. The Friends have become masters at seeking funding and successfully bid for money from the Heritage Lottery Fund.

And that’s where I came in. When the Friends decided to erect interpretation signs to tell the story of Low Hall they asked me to do the artwork. I had already helped them design their history booklet so already had the knowledge and familiarity of the site. The Friends wanted five signs to cover the site’s general history and specific designs for the butterfly element of the site’s ecology, a new pool with dipping platform, the location of the demolished Hindley South rail station and a commemoration of the story of Dorothy, the colliery locomotive that disappeared down a mine shaft taking its doomed driver with it.

The general history sign and site map. The site was designated a Local Nature Reserve in 2009.

The boards are up now, (except for the new pool, which needs time for the vegetation to establish before a good photo can be taken) and stand in various locations ready to tell their story to anyone passing by; walker, birdwatcher, cyclist, fresh air seeker or short cut taker. The work continues, cutting back, taking dragonfly counts, thinning out, tidying up, clearing streams, litter picking. . . . 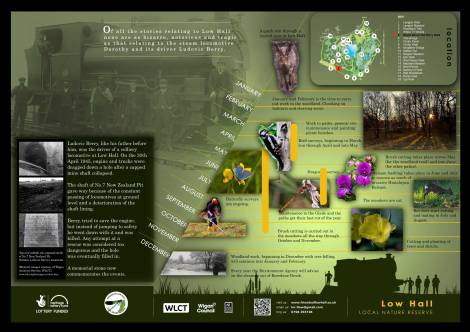 The Friends of Low Hall have their own website, which tells everything about the site’s history and the ongoing work. You can visit it here.